On our tour: Magical Snaefellsnes

It has already been a while, but I finally went on another tour over the weekend – Snaefellsnes Peninsula, the home of Snæfellsjökull. This volcano/glacier was made famous by Jules Verne, serving as the entrance to the center of the Earth in his novel “Journey to the Center of the Earth”.

Finally on our way – reaching Borgarnes

I previously attempted going on this tour, last weekend, however, before the tour could officially start we had to turn back because the weather had changed for the worst. The guide then was Baldur – quite a good guide, telling stories along the way, and combining them with a good sense of humor. Most importantly he was a good driver and he managed to get us back to Reykjavik safely, despite the stormy weather.
Yesterday’s tour was guided by Gummi.

After being picked up last, we left the city and headed north. Today we had a group of sixteen including myself, and everyone on the tour today was exceptionally kind. Gummi was telling his stories even before leaving the city, while the landscape became more and more beautiful.
We first stopped in Borgarnes for a coffee break, after which we went into the small town to see the burial mound of Skalla-Grímur Kveldúlfsson, which can be found in a small park.

After walking around this pleasant little park, we got back on the bus and Gummi took us to a ‘sod house’ which can also be found in this town. Once we arrived here Gummi started telling us about the houses, and why they were built the way they were. He took us all inside and we barely fit there! We got to see how the structure was built as he told us about some of the customs concerning building houses in the Viking era. We walked around for some time, and as soon as everyone had taken enough pictures, we left Borgarnes behind to continue to our next destination. 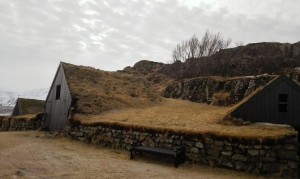 The next stop was a wall of basalt columns, where we made a brief stop to take pictures. This enormous natural wall was surrounded by beautiful snow-covered landscapes, so it took some time before we were all back on the bus, with plenty of pictures taken from this site.

We then continued for Breidafjordur (“Breiðafjörður”) beach, which is quite a unique beach for Iceland. This beach happens to be one of the few beaches in Iceland to have white sand instead of black sand. This is due it being a shell beach instead of a lava-stone beach. The beach itself looked like no beach I had ever seen – the sand was not as white as other beaches, but more a darker shade of yellow.

As we walked towards the shoreline, Gummi told us to keep our eyes open, since it would be possible to spot seals on this beach. He was right! As soon as we got closer, we did see two seals relaxing on the rocks in the water. We spent the time taking pictures of the seals, trying our best not to scare them off. Gummi, meanwhile, used his set of binoculars to see if there were any other seals around. As soon as he spotted the others, he passed his binoculars on to us, pointing where to look. 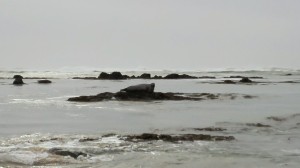 Short stops at the loveliest places

While telling us, even more, stories, and answering all the questions, Gummi drove us to a very beautiful little waterfall. While driving towards it, we were not able to see this waterfall, as you can only see it from other directions. So Gummi stopped to give us the opportunity to take proper pictures. I was soon starting to get quite hungry. When Gummi told us our next stop would be lunch – it sounded like music to my ears. I saw other sharing the same feeling. 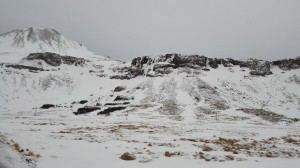 He took us to a lovely hotel, called Búðir, where we had the choice between a fish course and soup. I chose the fish course, which was quite good! After lunch, I walked around the hotel for a while. The location is really beautiful, looking out over the ocean as well as on the Snæfellsjökull. 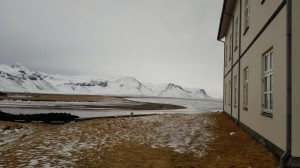 Straight out of books!

While driving us into the town Arnarstapi, Gummi told us the story of Bárður Snæfellsás – half man, half troll – who eventually disappeared into the Snæfellsjökull Icecap. Gummi stopped at the base of his statue and e told us we would be going for a hike. We walked for a short while to a viewing point, where we had an amazing view of the extraordinary coastline. Apparently, one can see whales from here, quite often. Sadly no whales were to be seen that day.

We continued our walk along the coastline, to the place where we could see the wonderful rock formation of an arch in the water. Further on, Gummi showed us a hole in the ground, where the water flowed to and led us to the other side of it to see it from a different angle. As we got nearer to the edge on the other side it became clear that we had just walked across another arch, without even noticing. 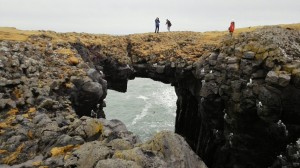 The hike along this beautiful shoreline ended at an enchanting little harbor, where Gummi picked us up with the bus. When we were back on the bus everyone was thankful for the warmth because it was starting to get quite cold outside. Seeing we were all a bit cold, Gummi decided to take us to a small café in town, which used to be the community center. We drank some chocolate milk, made from real Icelandic chocolate, with homemade whip cream, a real treat to get warm.

We then continued for Djupalonssandur (Djúpalónssandur), while Gummi told us about its history as a fishing village. We walked up to the shore to enjoy the view, and Gummi continued his story here. By now the wind was coming up really strong, making it much colder every minute. So after a far too short time making pictures of this wonderful place, we hurried back on the bus.

We were then headed back to Reykjavik, and as soon as we got around the North side of the Peninsula, the weather had gotten much worse. We arrived back in Reykjavik safe and sound a few hours later, being able to look back on a wonderful day filled with magical sceneries.

This website uses cookies to improve your experience. We'll assume you're ok with this, but you can opt-out if you wish.
Accept Read More
Feedback

Please remember to verify that your chosen month is correct.

There is no gallery selected or the gallery was deleted.